Kamado vs Pellet Smoker – Which One Is Better? Today, we’re comparing pellet smoker grills versus kamado smokers and what some of the differences are.

Hopefully, this will help you decide if you’re in the market for a particular smoker.

We’ll go over some of the advantages of one or the other and maybe what you want to go with at home.

How a Kamado and Pellet Smoker Work

On a pellet smoker, you use flavored grill pellets. You’re going to fill up a hopper, and then you’re going to smoke around the smoker shield to smoke your meat. The way a kamado smoker works is you’re going to fill it up with lump charcoal on the bottom. And then the same principle, it’s going to smoke up and around your meat. But there are some fundamental differences between the two, and we’ll go through some of them here.

Differences Between a Pellet Grill and Kamado Smoker

As far as the food tastes, your food taste will probably be very similar because you can use lump wood charcoal or wood pellets, so both will give kind of a wood smoke flavor with both options.

Because they are totally ceramic, they seal perfectly on the kamado smokers. So what that does is when it seals, and you have an air draught at the bottom and then a draft on the top, you’re basically creating hot air convection, almost like a hot air fan.

And because a kamado smoker is sealed, this can really cook your meat evenly, and being sealed; really locks in moisture. Sometimes your meat can get a lot moister when you’re cooking on a kamado smoker.

A pellet smoker grill can sometimes dry out what you’re cooking, depending on how long you smoke it.

Now, there are ways around that. You can put a moisture tray in the pellet smoker, fill it up with beer, whiskey, water, that type of thing, and that will help keep moisture in your pellet smoker.

So really, you’re going to see minor differences between the two. But some of the smoking purists really like to use the kamado smokers because it really feels like it locks in the flavor.

As far as actual cooking and maintenance go, that’s where we’re really going to see the biggest difference with the machines.

On pellet smokers, you can set your desired temperature. Let’s say you want it at 250 degrees, you fill it up with pellets, and then you’re done.

You can put a rack of ribs on there, play a round of golf, and come back. Four hours later, your ribs are going to be done, and your smoker will be sitting at 250 degrees.

So if you like the ease and you don’t like to tinker with it and don’t like to stay right by your barbecue, a pellet smoker is definitely going to be the way to go because it’s easier to use and requires less maintenance while you’re cooking.

The kamado smoker is obviously a much more hands-on approach because you can’t just set the desired temperature with a temperature controller. You have to create the cooking temperatures of the smoker. If you get a lot of oxygen, you can really get high heat that climbs up into the six, seven hundred degrees high-temperature range.

What you have to do is you have to “babysit” the kamado smoker and create the exact desired combination on the top and bottom of your airflow to create the temperature that you want.

And then you’re going to have to keep an eye on it and make sure it’s maintaining that temperature over a couple of hours period of time.

So a kamado smoker is a little more hands-on approach. Some people like that and really like to be hands-on with their cooking and really pay attention and really feel like they’re smoking what they’re cooking.

But, if you want ease of use, pellet smokers are the way to go. You can set it and forget it.

Which should I choose, pellet grill or kamado smoker?

There’s no right or wrong as far as which one will cook better and taste better; it’s a matter of opinion.

Some people say smokers; some people say ceramic cookers. I don’t think you’ll see a big difference in food taste. You may get a little more moisture in your kamado smoker.

But if you want the ease of use, get a pellet smoker.

Chris Johns is the founder of Rock's Barbecue® and has been an avid barbecue fan for over 20 years. His mission is to make grilling and smoking the best food possible easy for everyone. And each year, he continues to help more people with grilling, smoking, and barbecue recipe recommendations. 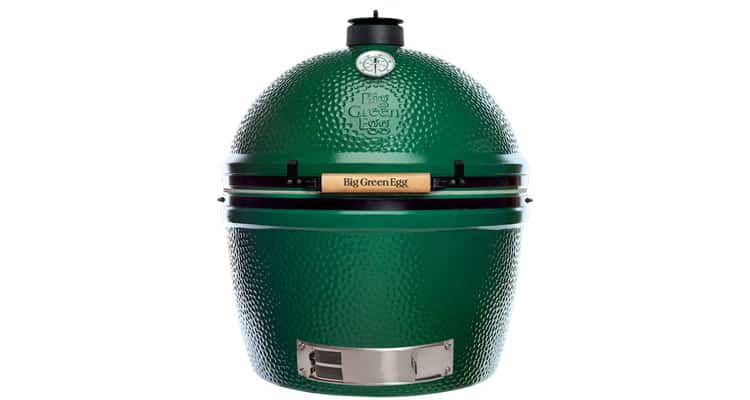 What is The Big Green Egg?

The Japanese have been cooking outside using ceramic pots called kamados for centuries. These early cooking vessels brought us The Big Green Egg.